Diddle me this.  Diddle me that.  Who’s afraid of getting fat?  Not I, says the COOK TO BANG chefs who cook healthy, badass food, and then subsequently burn off those calories banging like chimpanzees on meth.  So we can afford to indulge in a little turbocharged bar food every once in a while.  You deserve to make something ridiculously easy that earns you props from the prissy crowd who “don’t usually indulge in such low brow foods.”  So long as they put out after they are put in their place I am down to put up with them.  Aren’t the whiners the most satisfying to bang senseless?  It’s like wearing out their motor mouths by stuffing they with the tastiest of treats.  Ain’t no stopping you from getting some peace…of ass.

Step 1
Assemble two quesadillas by throwing a handful of jack cheese, ½ handful of chopped cilantro, pull half the meat off a chicken drumstick in pieces, half the chopped mango and a pinch of salt on one side of each open tortilla.

Step 2
Heat up the olive oil in a nonstick pan on medium heat.  Press each tortilla down so the ingredients smoosh together.  Throw the pair of quesadillas in the pan and cook them up, flipping when the pan-side browns (approx 3 minutes).  Cook the other side until it browns (approx 2 minutes) and then slice them up in quarters and serve with PAPAYA SALSA. 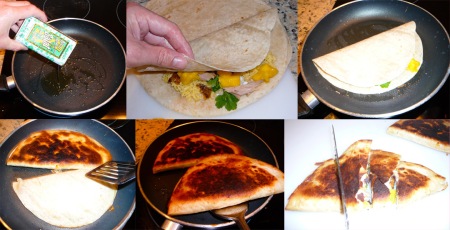