Experimentation makes the world go round.  Where would we be without Ben Franklin accidentally barbecuing himself with a kite?  I approach cooking with the same punk rock philosophy.  My instincts usually lead to success, but every once in a while I crash a burn.  My culinary experiments usually take place behind closed doors, the windows drawn, and a former Mossad security team keeping out the paparazzi.  I can’t have my cooking rep suffer should I create a black hole of shame in my kitchen.  There were these peanut butter cookies I made without sugar that were so bad they will follow me to into grave and end up stuffed in my suit pocket.  Every once in a while a new recipe needs to be attempted on the spot. This skeptical lawyer whose ass still looks banging under her pantsuit was concerned when she saw me peel a tangerine and shell shrimp.  “You’re putting that in my eggs?” I calmed down this sexpot lawyer that dominates in the courtroom and bedroom by pouring coffee into one of my beloved PHOTO MUGS. She drank the java, then ate her words, and entire plate, even forking away one of my shrimp!  My lawyer lover ended up being late to her deposition because she subpoenaed me between the sheets.  CTB 1 – LAW 0. 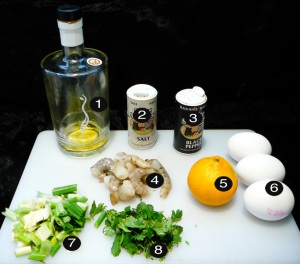 Step 1
Beat the eggs with salt, pepper and cilantro.

Step 2
Sauté the green onions in olive oil. Peel and section the tangerine, toss in the pan and grill until the skin browns (approx 4 min).  Add the shrimp and cook until they pinken.  Pour in the egg mixture and scramble like a champion.

These eggs kick ass with a side of SWEET ASS-BROWNS.