Don't commit hari kari! You got so much banging to do...

Dead sexy. That is how they describe those who got in my way. To my nemeses, you are on notice: don’t mess with my cooking or banging game! I trained in mountains of Japan not only to cook amazing Japanese dishes and bang geishas by the bushel, but to kill when necessary. Wielding a knife is already second nature to me. That’s merely in addition to my ability to climb walls with suction cups, assassinate foreign dignitaries in their sleep, and then bang their mistresses. It’s almost unfair to my rivals, but life is a series of injustices that I am slowly correcting. I have to make up for my yellow Walkman being smashed by a neighborhood bully when I was 8. If that means cooking, banging, and occasionally killing bad guys, so be it! These oysters are one of many tricks up my ninja sleeves. They render prudes powerless to control their unbridled lust. Hi-ya! 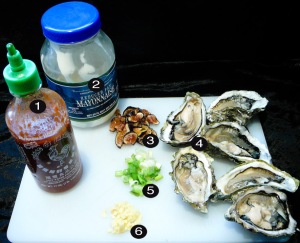 Step 1
Preheat your oven/toaster to BROIL. Mix up mayonnaise, ginger and Sriracha into a spicy mayonnaise.

Step 2
Place figs and green onions on top of the oyster meat. Add a dollop of spicy mayo to each oyster and spread it out so it bakes evenly. Place the oysters in the oven and broil until the spicy mayo browns (approx 5 min). Remove, allow to cool, and serve it up with a wicked smile.