Warm your date's bones before your bones get jumped!

It’s like an 80’s ski movie.  There you are in the ski lodge after a day making fresh turns all day on the slopes.  It’s snowing heavily and you’ve hung up your skis or snowboard.  Your bones start to thaw and across the bar you see a ski bunny or dude checking you out, a Hot Toddy in hand.  Not a bad idea.  You order yourself one before sauntering over and introducing yourself.  You make up a story about how you nearly made it to the 2002 Winter Olympics in Utah, but you chose instead to double major in quantum physics and Japanese at Oxford.  Sure you’re a billionaire now, but you regret not winning the gold for your country.  But hey, you’ll take their phone number as a consolation prize and make plans to meet up later after you shower the ski stink off.  Number in hand, you make your way over to high five your ski buddies and savor the Hot Toddy warming your cold bones. 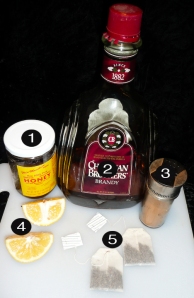 Step 1
Boil enough water for two glasses.  Place a teabag in each cup, pour in the hot water, and allow the tea to steep (approx 2 minutes).  Squeeze the juice from each lemon quarter into each glass.  Follow it up with a tablespoon of honey and a ½ teaspoon of cinnamon into each glass.  Finally dump a shot of liquor into each glass, mix it up, and drink it down.

This entry was posted on Friday, December 14th, 2012 at 10:01 am and is filed under libation lubrication, RECIPES, winter. You can follow any responses to this entry through the RSS 2.0 feed. You can leave a response, or trackback from your own site.

One Response to HOTTIE TODDY