This dish love you long time!

*all of these items are available at any Japanese/Asian market

On medium heat, boil the sake and mirin for 20-30 seconds until the alcohol cooks out.  Add the miso paste and cook until the chunks dissolve into the liquid.  Finally, mix the sugar in and cook until it dissolves.  Set the pan aside and allow the miso sauce to cool.

If necessary, de-bone the fish fillets.  Pat the fillets dry with a paper towel.  Slather up the fish with the miso sauce so they are fully coated with miso goodness.  Leave the fish in a bowl and cover with saran wrap.  Allow the fish to marinate in the miso sauce at least 2½ hours (the longer it marinates, the tastier it will be).

While the fish is baking, steam the baby bok choy until the leaves wilt and turn bright green.  Mix the soy sauce and lemon in a separate bowl and it toss the steamed bok choy. Serve the fish and bok choy artfully on the plate.  Your date should be remarkably wowed. 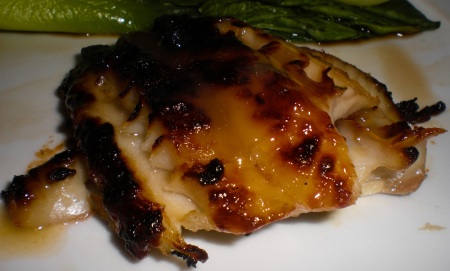