Roast them, eat them, do not fear them

Title translation: “Tomatillos for my friends with benefits”. Cook To Bang firmly stands behind our willingness to reach out and touch the sexy people of all nations and languages.  I’m not only a representative of international culinary seduction, I’m also a client.  Hence the multinational recipes, which truly give you BANG for your buck. Tomatillos are a piece of produce too often overlooked.  No doubt, I have walked past them in my local bodega wondering, “What’s with those green tomato thingees wrapped in their own leaves? I shall deny their existence just as I deny that there is an alien living in my basement that watches reality TV all day.  Sorry, Roger.”  Luckily I managed to break down my fear of the unknown because I had a date coming over who had already tried a good portion of my edible arsenal.  So on a hope and a prayer to one of Roger’s alien gods, I got down to business and made up something random, loading it with surefire aphrodisiacs.  Wouldn’t you know it, my date was rather impressed with my latest efforts and showed it via some new moves she learned watching Animal Planet.  We may have freaked Roger out with our inhuman grunts, but he’s a guest in my house.  So tough titties, you alien freeloader! 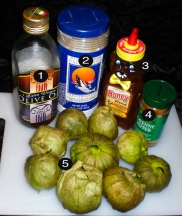 Step 1
Preheat the oven to 350 degrees F.  Peel the skins off the tomatillos, then wash them and cut them in half.

Step 2
Pour olive oil evenly over the tomatillos, and then evenly spread out the salt and cayenne pepper, before giving each slice a healthy dollop of honey.

Step 3
Throw the smothered tomatillos in the oven and roast until they soften and flatten a little (approx 35 minutes). Serve them up on a platter, pouring the honey-laden juice that leaked while cooking.

This entry was posted on Thursday, July 25th, 2013 at 9:19 am and is filed under aphrodisiac, APHRODISIACS ANONYMOUS, FINGER FOOD FOREPLAY, mexican, RECIPES, spicy, vegan, vegetarian. You can follow any responses to this entry through the RSS 2.0 feed. You can leave a response, or trackback from your own site.