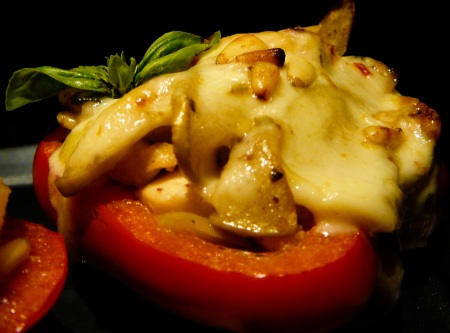 The stuffed pepper party train has left the station!

It’s time to throw down!  The week ain’t over yet, but you’re leady to let the dogs out.  Woof to the M-F’ing woof!  I suggest you get funky in the kitchen rather than unleash potentially rabid beasts onto the populace.  Sure it may not be as thrilling as sending cooped up canines out into your neighborhood to attack mailmen and Xanaxed housewives alike. You will however avoid a lawsuit and a stern warning from animal control.  Why not invite someone sexy over for a little party for two instead?  What better way to do that than with bell peppers, chicken and apples?  I do declare you are both in for a treat! Once you guys stuff yourselves with these aphrodisiac-stuffed peppers, it’s time for someone to get stuffed.  Don’t be surprised if those same dogs howl along with as you both scream pleasurable expletives into the night. END_OF_DOCUMENT_TOKEN_TO_BE_REPLACED