Ram that graham and until your lover say, "Dammmmn!"

Much props goes out to PRISCILLA in Charlotte, NC for this confection concoction. I first made this dessert while I was doing a CTB Home Invasion at her pad. Homegirl had so much great food to work with it was embarrassment of riches. The ladies atteneding all did agree that it was pretty damn delicious. Whodathunk such a random commingling of goods would kick such ass? The graham rammed itself down everybody’s throats with not a complaint in the mix. It’s as if it came to life, wooed each and every one of us individually, and then banged us sweetly. I want to say I was taken advantage of, perhaps violated. But that would be a lie. All witnesses can attest that I was flirting with my dessert all night. Every few minutes I’d be checking it out in the oven, fondling it, cooing sweet nothings about how banging it looked. I woke up in an empty bed with nothing but graham and coconut crumbs and a note that read: Thanks for the memories! END_OF_DOCUMENT_TOKEN_TO_BE_REPLACED

I was originally only going to pick my  five favorite RECIPE CHALLENGE submissions. But there were so many outstanding entries that a few warmed over my cold heart made of steel and wire. So six of my beloved fans got themselves signed copies of the COOK TO BANG book. Thank you to all 73 people who submitted outstanding recipes. I would gladly cook you a candle lit dinner so long as you are hot, female, and don’t have a man at home with a loaded gun. Now’s your chance to decide who wins the perfect pair of CALIVIRGIN‘s award-winning Cold-Pressed Extra Virgin Olive Oil and Barrel-Aged Balsamic Vinegar. Voting ends Friday, June 11th.

This post brought to you unofficially by Planned Parenthood. "Got condoms? You god damn right!"

CTB is all about promoting responsibility in our depravity. Sure we cook and bang with reckless abandon, but never at the cost our health or our playthings’. I don’t mean this to sound like an after school special PSA with a crack addicted pregnant teenager fighting for the final spot on the cheerleading squad. But you should wrap that shit up before spelunking. That way you can bang from here to eternity. It’d be a damn shame to cut your CTB career so short. So how about getting some practice with this phallic dish? It’s win win: guys will become more mindful of the need to practice safe sex. Ladies will have a fine visual aid that can lead their minds to the dirty place. Now start wrapping before you start stuffing. 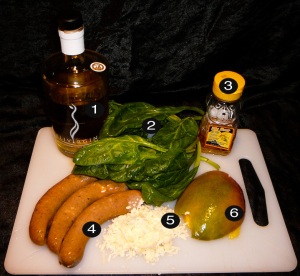 Step 1
Preheat your oven to 350°F/175°C.  Peel away the mango skin and cut long thin slices. Split the sausage, leaving one side intact. Stuff the sausage with mango, mozzarella, and honey. Cut the stems away from the spinach and wrap the sausages, pinning the leaves with toothpicks.

Step 2
Drizzle a small baking pan with oil, rubbing it all in. Lay out the wrapped sausages evenly and throw in the oven. Bake until the spinach because crispy and the mozzarella melts (approx 25 min). Remove the toothpicks before serving.