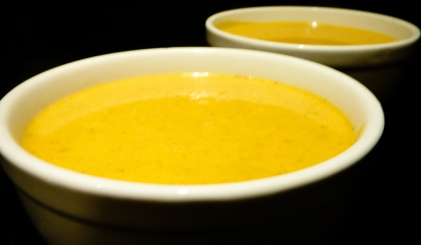 Cook To Bang is nothing without its readership. If a recipe helps someone bang in the woods and no one is there to film it, does it make a moaning sound? I’ll leave that to the philosophers far wiser than me to answer. A massive shout out is due to my man DJ JD of Ottawa, Canada for this recipe. Homeboy came through with a unique and outstanding recipe when I needed it most. I make a point of not dating vegans since they severely limit my palette. But this particular vegan’s beauty is outclassed only by her cheeky personality. Naturally, a classy specimen of humanity deserves a little leeway. So after racking my sex-addled brain for a vegan recipe, I found JD’s email and took it for a test drive. Hot damn! This butternut squash soup made both our heads spin with glee. The vegan vixen was more than pleased. If Cooking To Bang was an Olympic event, JD just won the gold. CUE “Oh, Canada!” END_OF_DOCUMENT_TOKEN_TO_BE_REPLACED

CREAM IN YOUR PATCHWORK PANTS SPINACH

Be sure not to spill spinach on your Birkenstocks!

The vegans deserve some love from time to time. Neglecting their needs would be insensitive of me as the apex of a modern gentleman. Besides, I have had a parade of smoking hot, not too hippie chicks passing through my boudoir recently to ignore their needs. Their picky palette must be satisfied too before my insatiable appetite gets its finger-licking fix. Creamed spinach was my bag that night, but my no-cream cutie wasn’t having it. Alas, the Thai cuisine saved the day. Coconut milk was a satisfactory cream-substitute for little miss animal freedom fighter. Smiles all around. Homegirl got her way; homeboy got to play. Plus a new dish was born for the next vegan Thanksgiving when we need something to go with the organic tofurkey. 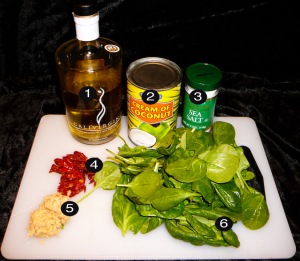 Step 1
Sauté the ginger in olive oil (approx 30 sec) before adding the sun-dried tomatoes (approx 1 min). Throw in the spinach and sauté with a dash of salt until it wilts (approx 2 min). Pour in the coconut milk and slowly cook on low heat until the liquid mostly evaporates and absorbs into the spinach (approx 5 min).