There's room for one more, three's never a crowd.

I don’t know about the rest of you, but I have a hard time saying no to a three-way.  Even if that just means three-sided tofu treats, I’m down.  So many good things come in threes.  Comedy gold is done in trifecta.  My favorite nights of carnal connections involved a third party.  Clearly three is company and never a crowd.  And what better way to ignite such an evening of exploration and fornication than with some edible treats?  These tofu triangles are classy, sassy and won’t leave you gassy. Plus you can appeal to the free loving hippie in all of us by serving tofu.  A little curiosity never hurt no one no how! END_OF_DOCUMENT_TOKEN_TO_BE_REPLACED

Holy shit, bra!  Did you catch Phish at Bonaroo?  I mean like wow, man!  Maybe I can articulate it without than bohemian euphemisms once the acid wears off.  At least I was able to pick up some hard-body hippie harlots in the lot selling Dank Organic Veggie Burritos out of my mom’s Prius.  They thought my vegan wraps were heady, yo.  I played them some old bootlegs from like WAY back in the day.  They were mad impressed, especially when they started rubbing the Phish tat across my heart.  Good thing they didn’t realize it was just henna until after I get my dirty hippie orgy on. END_OF_DOCUMENT_TOKEN_TO_BE_REPLACED

I don’t know why you say goodbye, I say, “Well, Hello! Portobello Tacos.”

Well, hello there!  Haven’t seen you around.  I would have noticed someone as fine as you.   What inspired you to come to my little part of the world?  No shit!  You came to see me?  You want me to cook to bang you?  Fair enough.  It’s just that I’m usually the one pursuing dates.  Nothing wrong with someone aggressive that knows what they want.  If it’s me you want, so be it. Wait, you’re vegan? Why?  Never mind. It won’t be a problem. So how about some Portobello mushroom tacos?  Glad you enjoyed them.  Shall we retire to the bedroom now?  Thanks for stopping by. END_OF_DOCUMENT_TOKEN_TO_BE_REPLACED

I should have known better. Vegan girls are always trouble. And it’s not just because they are a pain in the ass to feed. There’s something kooky in anyone who limits their culinary possibilities so severely. Maybe they need to take a few classes at an online cooking school to learn that food is not the enemy. But the upside is the rarity of obese vegans. Harmony was certainly no exception. She’s yoga master flex, hence me taking an interest. Picking up one’s yoga instructor is a delicate dance. The last thing you want to do is crash and burn, too humiliated to return to a class you enjoyed. I overheard Harmony gab on about her vegan diet and the explosive orgasms she enjoyed as a result, so I rocked the vegan angle. Post-yoga vegan soup on a cold Sunday evening? Harmony was on it, and on me after she sucked down my soup. Home girl demonstrated yoga possibilities I had never even wet-dreamed of.  Now we have a regular Sunday Cirque du Vegan: I cook; she defies and gratifies gravity. END_OF_DOCUMENT_TOKEN_TO_BE_REPLACED

This simple as sin noodle dish’s got everything. Want healthy green kale? You got it, bub, Feel like the tart of lime, a hint of Vietnamese with the fish sauce, maybe the tang of sun-dried tomato? Indoubely-deed. How about an aphrodisiac triple threat? Bim bam boom. That mean old Dr. Atkins will shake his immortal head in shame over the carbs, but in their defense, they are pretty light and airy. And that will come in handy when all the colors swirling around this healthy noodle dish spin you and your date off your feet and into bed. Feel free to watch the kaleidoscope in the air when you’re both lying panting, post-coital, feeling it. END_OF_DOCUMENT_TOKEN_TO_BE_REPLACED

POLENTA THOSE CLOTHES OFF SALAD

Polenta it all off, the skivvies too.

Making those pesky clothes vanish is easier than you’d think. Despite the popular folklore that you first must pass a series of relationship tests in order to get there, au contraire. The scientists working around the clock in shifts down in the Cook To Bang lab have discovered a way to leapfrog that major time suck. Polenta draws people sharing it for reasons I could only explain via a Glenn Beck crazy chart. It has the effect even with polar opposites like a hipster honky in pants tighter than the sororitease he’s banging’s black fuck-me pants. Don’t question the science. It just works, like gravity. Or condoms*. END_OF_DOCUMENT_TOKEN_TO_BE_REPLACED 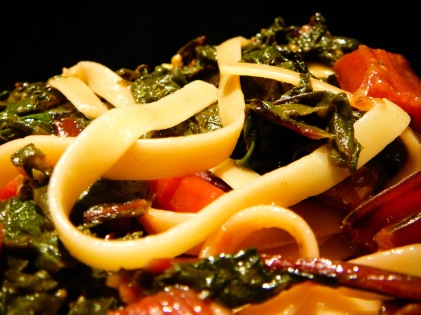 Somewhere over the rainbow, something's turning me on. Must be my Wizard of Oz fantasy.

Nothing gives me a chubby like an aesthetically pleasing plate of food. Not only does it satisfy the hunger pangs, but the emotionally pangs as well. Mark my words, nothing inspires sexy time dessert quite like a beautifully presented meal. How it tastes is almost secondary to how it looks on the plate. Shallow? Perhaps. But don’t question the rules of culinary seduction unless you want that chard on to go to waste. END_OF_DOCUMENT_TOKEN_TO_BE_REPLACED

CREAM IN YOUR PATCHWORK PANTS SPINACH 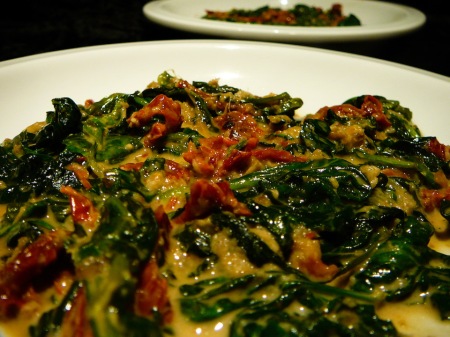 Be sure not to spill spinach on your Birkenstocks!

The vegans deserve some love from time to time. Neglecting their needs would be insensitive of me as the apex of a modern gentleman. Besides, I have had a parade of smoking hot, not too hippie chicks passing through my boudoir recently to ignore their needs. Their picky palette must be satisfied too before my insatiable appetite gets its finger-licking fix. Creamed spinach was my bag that night, but my no-cream cutie wasn’t having it. Alas, the Thai cuisine saved the day. Coconut milk was a satisfactory cream-substitute for little miss animal freedom fighter. Smiles all around. Homegirl got her way; homeboy got to play. Plus a new dish was born for the next vegan Thanksgiving when we need something to go with the organic tofurkey.

Step 1
Sauté the ginger in olive oil (approx 30 sec) before adding the sun-dried tomatoes (approx 1 min). Throw in the spinach and sauté with a dash of salt until it wilts (approx 2 min). Pour in the coconut milk and slowly cook on low heat until the liquid mostly evaporates and absorbs into the spinach (approx 5 min). 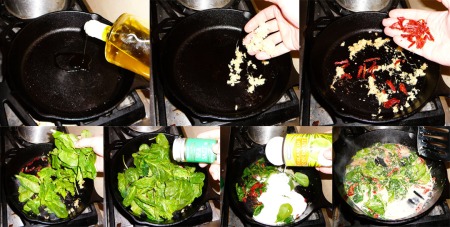 Community Supported Agriculture boxes make all my cooking and banging possible.  More importantly, it makes it affordable.  This is in no ways sponsored.  Payola is not going on, although to tell you the truth, selling out so I can fill a hot tub full of vodka-infused Jell-O sounds pretty good right about now.  I just want to get the word out to all you food lovers looking to avoid auctioning off your organs to afford shopping at Whole Foods.  That place is a food strip club with a “don’t touch the girls” vibe.  I’ve dropped more ducats in that store than I have on strippers, booze and other illicit contraband combined.  As a food whore, it was totally worth it.  But I’ve found an alternative:

I pay online ahead of time for a magical box that gets delivered to my local market.  When I pick it up and take it home, I act like a giddy 80’s schoolgirl who finally got her autographed New Kids on the Block poster.  What’s in the box varies week to week and never disappoints.  It’s all local organic, seasonal, top-shelf produce that challenges me to create new recipes I throw on the site.  Creating up with 5 new recipes every week can be= challenging.  Luckily the CSA box makes decisions for me.  I dropped $15 on this box and here’s what I found in it:

Your kidney and half your liver would be allocated to a wealthy Swiss industrialist if you bought the same goods at Whole Foods.  But now you have a heap of amazing produce to turn into magnificent meals to seduce any number of sexy prospects.  You’re already saving cash not taking your dates to restaurants. Imagine how much more you could save and then spend on booze and lube!

Below are some COOK TO BANG recipes directly inspired by what I found in this Foodie’s Pandora Box:

WRAP THAT HIPPIE BURGER UP TIGHT 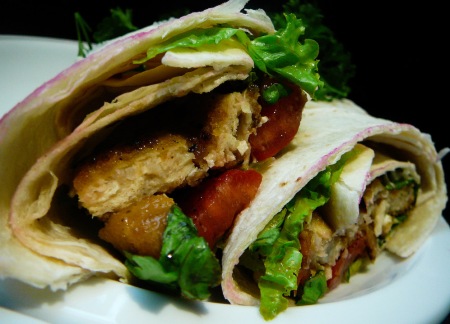 This wrap is both Sexy and environmentally friendly!

Calling all hippie hotties! They are few and far between.  Most of these moonbeaming beauties’ looks have faded away like Jerry.  Yoga and clean living have saved a few, not to mention the new recruits who haven’t become jaded by the man keeping them down.  To those I merely say, “You hungry for some like totally dank organic yumminess?”  Bring that free lovin’ attitude of yours and a bottle of something “heady”.  I’ll crank some Dead bootlegs that I’ve been hording for just such trip down the hairy rabbit hole.  Keep on keeping on down the road now.  Take a wrap for the road you’ll be “Truckin’.”

Step 1
First grill or pan-fry the veggie burgers and cut them up with the spatula.

Step 2
Assemble the wrap in a long thin line across the tortilla laying out the lettuce, beets, tomato, almonds, feta cheese and veggie burger. Add any dressing or sauce.

Step 3
Wrap them up folding the tortilla a third of the way over, fold over the left and right ends, and roll it over the top.  Cut the wraps in half.

Serve up the wraps solo or with some SOUP. 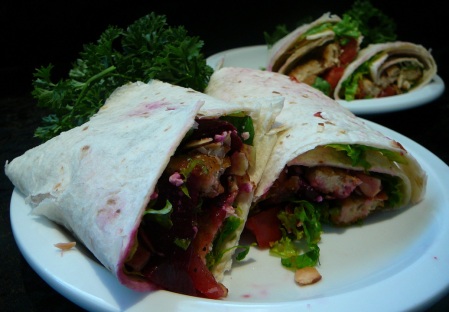