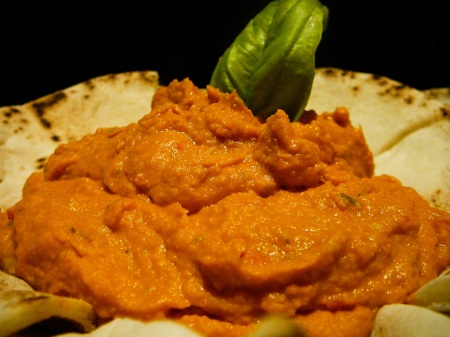 Hummus = Hummer, simple as that

Bing bang boom!  When you hear that sound, you know it’s on.  It’s pretty much on as soon as your date sees you make homemade hummus.  They will be puzzled at the simplicity, your mastery of the food blender, and this uncanny ability to serve them exactly what they want.  Don’t question the logic.  Go with it giving your most defiant stare of FUCK YEAH!  There’s no need to say anything.  The creamy, flavor-packed Middle Eastern condom-ment will say it for you.  Your date will innately understand that they have a goddamn legend-in-the-making on their hands and acquiesce to your most perverted demands.  See you in the Elysian Fields! END_OF_DOCUMENT_TOKEN_TO_BE_REPLACED 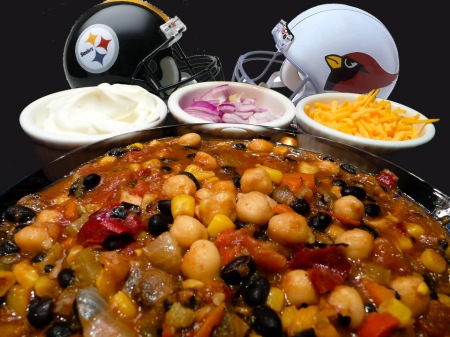 I’m gasping for air as I write this post.  Good god is this veggie chili sexy, healthy and satisfying.  Trust me when I say this is going to be a challenge to not eat it all before I bring it to the Super Bowl party this weekend.  It’s like waiting for marriage to engage in sexual relations.  It’s a nice idea in theory.  But seriously, why?  Sure it might feel great to finally experience pure ecstasy with the person you will spend the rest of your life.  But then again it might be a huge let down when you finally claim what’s yours.  Luckily you don’t have to worry about that with this chili dish.  It actually tastes better the next day once the flavors have wrapped their legs around the veggies and grinded until they make culinary cunnilingus.  If you do manage to keep this ridiculously healthy chili around for the Super Bowl or other party, you will certainly be busy taking down phone numbers from eager foodies with an appetite for you.  Take a number. 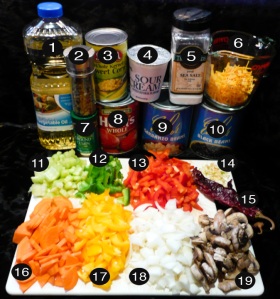 Step 1
Heat up the vegetable oil in a stockpot on medium-high.  Sautee the garlic solo until they brown (approx 30 seconds). Cook the onions until they become translucent (approx 2 minutes).  Throw in all the carrots, celery, yellow, red and green peppers and cook until they soften, stirring occasionally. (approx 15 minutes) 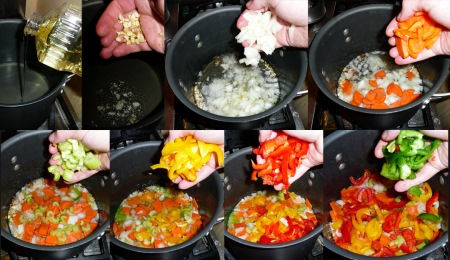 Step 2
It’s time to spice things up.  Cup up the New Mexico chilies, then toss them into the pot with the mushrooms let it simmer (approx 2 minutes).  Now smack it all up with ground cumin, oregano and salt and cook in the flavor (approx 10 minutes). 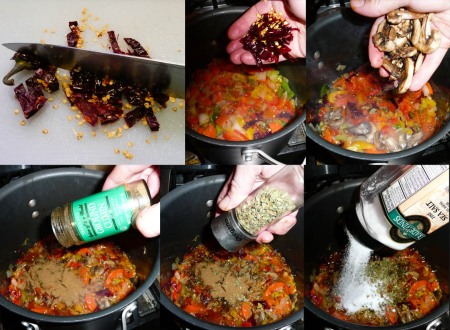 Step 4
Drain the liquid from the cans of corn, garbanzo beans and black beans, then dump them all into the pot and cook them with all the other goodies until they become united in their chili power (approx 10 minutes).  Serve up with a sexy selection of toppings like shredded cheddar, sour cream and diced red onions. 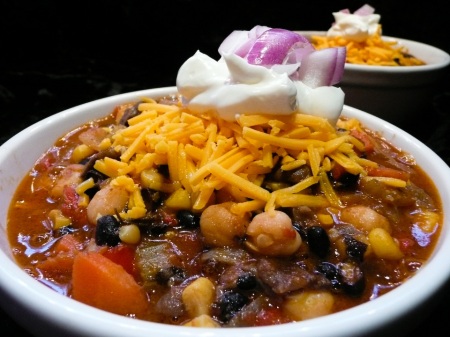