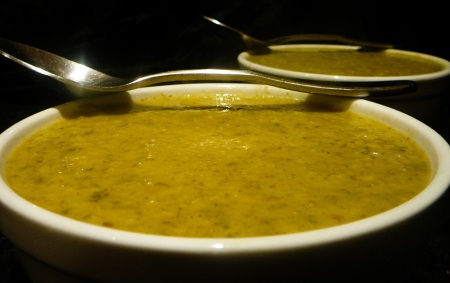 I should have known better. Vegan girls are always trouble. And it’s not just because they are a pain in the ass to feed. There’s something kooky in anyone who limits their culinary possibilities so severely. Maybe they need to take a few classes at an online cooking school to learn that food is not the enemy. But the upside is the rarity of obese vegans. Harmony was certainly no exception. She’s yoga master flex, hence me taking an interest. Picking up one’s yoga instructor is a delicate dance. The last thing you want to do is crash and burn, too humiliated to return to a class you enjoyed. I overheard Harmony gab on about her vegan diet and the explosive orgasms she enjoyed as a result, so I rocked the vegan angle. Post-yoga vegan soup on a cold Sunday evening? Harmony was on it, and on me after she sucked down my soup. Home girl demonstrated yoga possibilities I had never even wet-dreamed of.  Now we have a regular Sunday Cirque du Vegan: I cook; she defies and gratifies gravity. END_OF_DOCUMENT_TOKEN_TO_BE_REPLACED 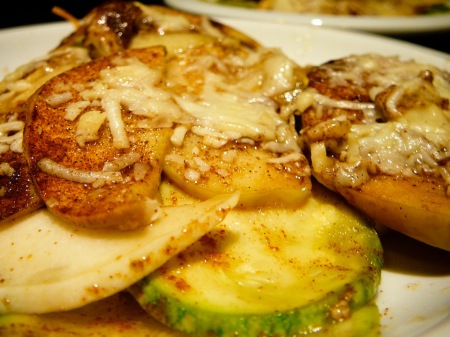 Squash all resistance to your charms!

Some knucklehead who probably hasn’t seen a naked woman since his subscription to National Geographic ran out told me squash ain’t sexy.  Granted it doesn’t pack the same luscious sex appeal as an oyster or fig, but damnit, squash has gotten me laid plenty of times.  Squash is the perfect fall ingredient to prep you for the cold winter that lies ahead.  They are inexpensive, tasty and versatile as a bisexual Cirque du Soleil performer.  My problem is that I keep going back to my classic squash dishes.  But you gotta break out of routine, no matter how awesome that routine might be, if you hope to attain glory.  This little Frankenstein’s monster brought honor to my family; my reputation as a lady-slayer stands untarnished.  It was spicy, sweet and comforting all at the same time.  My one caution is that this side dish very well may outclass the rest of your meal.  So cook with bravado! 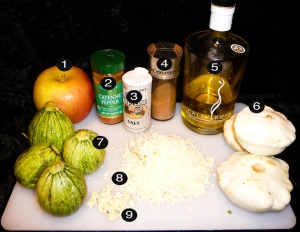 Step 1
Preheat the oven to 350°F/175°C.  Slice the ends off the globe squash and cut into thin rounds.  Do the same for the petit pan squash.  Toss the squash with the garlic, olive oil, cayenne pepper and salt.  Lay them out in a large flat baking pan. 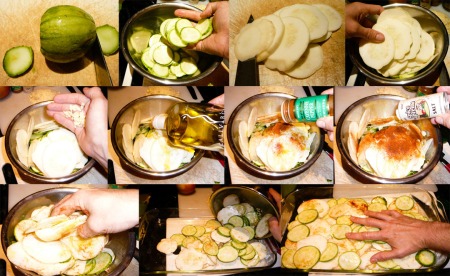 Step 2
Core and slice up the apple into thin slices.  Lay them evenly over the squash and season with cinnamon.  Scatter the cheese across evenly and you’re ready to rumble.

Step 3
Throw the casserole in the oven and bake until the apples and squash soften, and the cheese melts (approx 30 min).

Serve as a kickass side to any number of outstanding ENTRÉES. You could eat it solo, it’s that good. 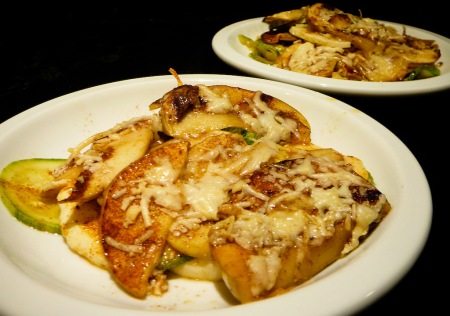