Community Supported Agriculture boxes make all my cooking and banging possible.  More importantly, it makes it affordable.  This is in no ways sponsored.  Payola is not going on, although to tell you the truth, selling out so I can fill a hot tub full of vodka-infused Jell-O sounds pretty good right about now.  I just want to get the word out to all you food lovers looking to avoid auctioning off your organs to afford shopping at Whole Foods.  That place is a food strip club with a “don’t touch the girls” vibe.  I’ve dropped more ducats in that store than I have on strippers, booze and other illicit contraband combined.  As a food whore, it was totally worth it.  But I’ve found an alternative:

I pay online ahead of time for a magical box that gets delivered to my local market.  When I pick it up and take it home, I act like a giddy 80’s schoolgirl who finally got her autographed New Kids on the Block poster.  What’s in the box varies week to week and never disappoints.  It’s all local organic, seasonal, top-shelf produce that challenges me to create new recipes I throw on the site.  Creating up with 5 new recipes every week can be= challenging.  Luckily the CSA box makes decisions for me.  I dropped $15 on this box and here’s what I found in it:

Your kidney and half your liver would be allocated to a wealthy Swiss industrialist if you bought the same goods at Whole Foods.  But now you have a heap of amazing produce to turn into magnificent meals to seduce any number of sexy prospects.  You’re already saving cash not taking your dates to restaurants. Imagine how much more you could save and then spend on booze and lube!

Below are some COOK TO BANG recipes directly inspired by what I found in this Foodie’s Pandora Box:

The mystique of aphrodisiacs have been cock-blocked by science.  But genuine physiological effects that made these ingredients magical in the Ancient World still yield results today.  Below is an overview of these gifts from the love gods:

•    ARTICHOKES were reserved only for men in 16th Century Europe because of the sexual power they presumably granted.  Thanks to modern, science we know they merely freshen your breath and detoxify your liver thanks to the cornucopia of vitamins, minerals and phytochemicals packed into every bite.

•    ASPARAGUS is a natural Viagra.  17th Century UK naturalist Nicholas Culpepper hailed asparagus for “stir(ring) up lust in man and woman.”  The magical vegetable is loaded with potassium and Vitamin A that boost sex drives and the folic acid produces histamines that increase the power of an orgasm.

•    AVOCADOS contains fiber, folate, vitamins B6, C and E, beta-sitosterol and glutathione, which can enhance feelings of love and romance.  The Aztecs used avocados as a cholesterol-free, sodium-free, sexual stimulant, which just so happens to make most meals from salad to sandwiches taste way sexier.

•    BASIL aids circulation, which can stimulate sex drives and increase fertility in women.  The scent drives men bat-shit insane so women in ancient times dusted their breasts with powdered basil when they were on the prowl.  Hey now!

•    BEETS have been used since Roman times to increase male virility due to their high boron content.  “Take favors in the beetroot fields” was a popular early 20th Century euphemism for visiting prostitutes.

•    BLACK BEANS contain enough protein, fiber and folic acid to get our blood going, plus plenty of the amino acid tryptophan to relax us and get us in the mood.

•    CHILES increase your heart rate that can enhance your pleasure receptors and releases endorphins that can make you feel energized or like you’re floating (or banging).  No wonder Montezuma drank it in his hot cocoa before paying a visit to his harem.

•    CHOCOLATE gets the heart rate up, increases blood flow and creates a natural feeling of well-being, euphoria, and with any luck, wanton lust.  Ancient Aztec’s thought it invigorated men and made women less inhibited and they consumed it before battle or intense rounds of sexual activity.

•    COFFEE has similar physiological effects in women that oysters cause in men: it turns them on.  The female libido can be supercharged for second and thirds with some caffeinated beans and sensual words.  Another cup of Joe, babe?

•    FIGS are a killer source of flavonoids, polyphenols, and antioxidants that help you go long and strong.  They look like a woman’s unmentionables, symbolized fertility in Ancient Greece and drove Cleopatra randy.  Many biblical historians wager that the fig originated in the Garden of Eden. Talk about a forbidden fruit!

•    GINGER has turned on most civilizations including the Chinese, Greek, Roman and Indian where it was hailed in the Kama Sutra.  The root’s arousing scent and health benefits does a male body good, increasing heart rate and perspiration (like in sex) and gets the blood flowing to your extremities, naughty parts included.

•    GRAPES were getting people off way before records were ever kept.  Just ask the Egyptians or Greeks or Romans who can attest to the effectiveness of feeding this anti-oxidant finger food to their lovers.  And we haven’t even touched on the subject of wine yet!

•    HONEY is rich in Vitamin B (root of testosterone) and boron (helps body process estrogen) so both sexes are covered.  It was the nectar of Aphrodite and medieval couples would channel their inner Barry White by drinking mead.  Why do you think they call it a honeymoon?

•    OYSTERS contain high levels of zinc that increase male potency, along with D-aspartic acid and NMDA compounds that can release hormones like testosterone and estrogen.  The fact that oysters resemble female genitalia is beside the point.

•    PINE NUTS are rich in zinc like oysters and have a long history as a natural Viagra.  These magical nuts have been used in medieval European love potions and the beds of Arabian lovers.

•    ROSEMARY is high in iron, calcium, and Vitamin B6, which can increase blood circulation to the skin and increase one’s sensitivity to touch.  It’s powerful scent plays on our scent memories, the strongest tie to emotional and sexual experience.

•    SEAFOOD of any variety has long been considered aphrodisiacs since Ancient Greece because Aphrodite was born of the sea.  Beyond tasting amazing, fish and shellfish are rich in protein and omega-3 fatty acids that kick cancer’s ass so surely they can help defeat a little erectile dysfunction.

•    STRAWBERRIES are not technically aphrodisiacs, but they are edible valentines shaped like hearts.  They were a symbol of the Roman Goddess of love Venus and when dipped in chocolate they legitimately become aphrodisiac city.

•    WATERMELON have quantities of citrulline that trigger arginine, quite literally the Viagra chemical that causes blood to flow and libidos to pump.  No doubt, the fact that this refreshing fruit contains cancer-fighting nutrients like lycopene and beta-carotene will be lost on most.

Simple and seductive? You can't beat a beet salad.

A naysayer might claim that beets are a boring vegetable on par with brussel sprouts or kale.  Punch this ignoramus in the face because they are clearly ignorant to just how goddamn sexy beets can be.  First, beets are an aphrodisiac used since Roman times to increase male virility due to the high boron content.  “Take favors in the beetroot fields” was a popular early 20th Century euphemism for visiting prostitutes.  Happy ending history aside, beets are amazing for your circulatory system and freshen your breath, which comes in handy for horny people with heart problems and halitosis.  But they also taste amazing and with the right combination of foods become an unstoppable force at motivating hanky panky.  Goat cheese and beets together form an alliance on par with Hall and Oates or Siegfried and Roy (minus the tiger mauling).  They are your friends and allies when it comes to the horizontal mambo.  Beet salad is a classy choice for a first date because it’s neither expensive nor expected.  It’s refreshing, invigorating and will cue you up for some felating.  Combining the salad with a bottle of wine will equate to a sublime time oh so divine. 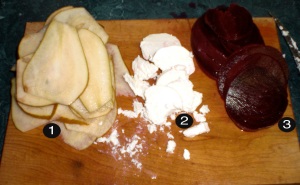 Step 1
Steam or boil beets until a fork can easily be stabbed through them.  Throw the beets into a container filled with ice-cold water and allow them to cool in the fridge for 30 minutes or so.  The skin should easily peel off.  Cut the beets into rounds. 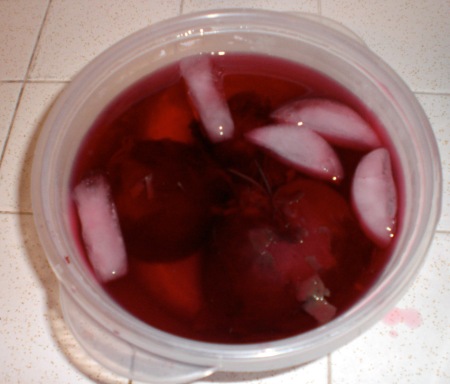 Step 2
Create stacks of the holy trinity, sandwiching the goat cheese between the beets and pears.  Cover them in balsamic vinegar and olive oil and serve.  Two or three per plate should suffice for a spectacular starter or a healthy lunch before an afternoon quickie.