Once you popsicle you can’t stop, sicko!

It was only a matter of time before COOK TO BANG invaded the popsicle world.  Summer is here and we need a cool and refreshing way to rev up our libidos.  Look no further than the CTB Pornsicle series.  We’re talking frozen pops loaded with APHRODISIACS and attitude.  This is the perfect post-coital treat to get your loins a much-needed recharge for Round 2 banging your divine date demands.  Feel free to include these frozen phallic pops are perfect to include in your culinarylingus activities.  With fewer calories and natural ingredients, why would you lick anything else?

END_OF_DOCUMENT_TOKEN_TO_BE_REPLACED

Who da freak? You da freak! And I sure do like it!

It’s about that time. What time you ask? It’s certainly not the time to get dull and apologetic. No sir. Put away the penny loafers and break out the rubber gimp suit. Time to act out your freakiest, kinkiest, most debauch fantasies EVER! Feel like covering yourself in honey and letting grizzly bears lick you clean? Go for it! Ever wonder what it would be like to eat a sandwich while banging someone’s brains out? No time like the present? Have you ever fantasized about combining watermelon into a salad? You are one sicko. But I love it! There are no rules here. We’ll designate a safe word in case we go too far into our depravity. That word is “MORE!” END_OF_DOCUMENT_TOKEN_TO_BE_REPLACED

It’s party time! The night is full of possibilities.  You have your date lined up.  You are pretty sure things are good to go. So don’t leave the cocktails to chance.  Class wherever you’re going up with some watermelon ice cubes.  You can turn a boring vodka soda into a superbly subtle recipe for delectable debauchery.  Watermelon is a bonafide aphrodisiac that has the same compounds that Viagra offers to get guys’ pistons firing at full speed.   The juicy melon is mostly water, with a refreshing flavor that does your body right.  Allow the cube to melt and the watermelon particles break away, turbo-charging your drink for the night ahead.  If an erection lasts for more than four hours…go with it! END_OF_DOCUMENT_TOKEN_TO_BE_REPLACED 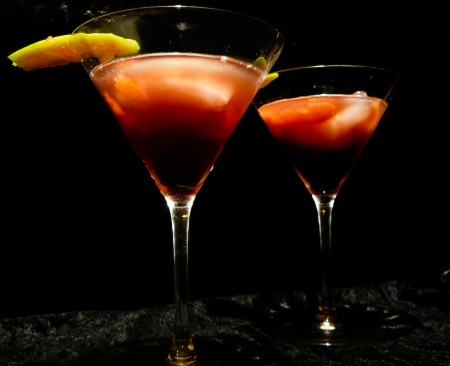 Sex & The City? More like Sex In The City!

This one goes out to all you ladies having Sex & The City parties or just having sex in the city.  We all know that you sophisticated women of the world like to relax and gab out their lives with a cocktail in hand.  Sure the Cosmo is the uniform drink, but me thinks there’s a room for a new contender.  The Sour Apple Martini is way to tart and a regular James Bond-style martini is way too boozy and requires you to have a watch that shoots lasers.  Surely there’s a happy medium that is classy, refined and the “just right” like the Little Red Riding Hood in Jimmy Choos seeks.  Ladies, I present to you a simple, fast and “just right” cocktail that has made every woman I served it to just a bit classier, not to mention friskier.  So whether it makes you Charlottes into Samanthas or the Mirandas into a Carries (feel free to correct me as I watched the show only once with my mother who insisted that the key to understanding women was watching Sex & The City), COOK TO BANG has you covered. END_OF_DOCUMENT_TOKEN_TO_BE_REPLACED

The mystique of aphrodisiacs have been cock-blocked by science.  But genuine physiological effects that made these ingredients magical in the Ancient World still yield results today.  Below is an overview of these gifts from the love gods:

•    ARTICHOKES were reserved only for men in 16th Century Europe because of the sexual power they presumably granted.  Thanks to modern, science we know they merely freshen your breath and detoxify your liver thanks to the cornucopia of vitamins, minerals and phytochemicals packed into every bite.

•    ASPARAGUS is a natural Viagra.  17th Century UK naturalist Nicholas Culpepper hailed asparagus for “stir(ring) up lust in man and woman.”  The magical vegetable is loaded with potassium and Vitamin A that boost sex drives and the folic acid produces histamines that increase the power of an orgasm.

•    AVOCADOS contains fiber, folate, vitamins B6, C and E, beta-sitosterol and glutathione, which can enhance feelings of love and romance.  The Aztecs used avocados as a cholesterol-free, sodium-free, sexual stimulant, which just so happens to make most meals from salad to sandwiches taste way sexier.

•    BASIL aids circulation, which can stimulate sex drives and increase fertility in women.  The scent drives men bat-shit insane so women in ancient times dusted their breasts with powdered basil when they were on the prowl.  Hey now!

•    BEETS have been used since Roman times to increase male virility due to their high boron content.  “Take favors in the beetroot fields” was a popular early 20th Century euphemism for visiting prostitutes.

•    BLACK BEANS contain enough protein, fiber and folic acid to get our blood going, plus plenty of the amino acid tryptophan to relax us and get us in the mood.

•    CHILES increase your heart rate that can enhance your pleasure receptors and releases endorphins that can make you feel energized or like you’re floating (or banging).  No wonder Montezuma drank it in his hot cocoa before paying a visit to his harem.

•    CHOCOLATE gets the heart rate up, increases blood flow and creates a natural feeling of well-being, euphoria, and with any luck, wanton lust.  Ancient Aztec’s thought it invigorated men and made women less inhibited and they consumed it before battle or intense rounds of sexual activity.

•    COFFEE has similar physiological effects in women that oysters cause in men: it turns them on.  The female libido can be supercharged for second and thirds with some caffeinated beans and sensual words.  Another cup of Joe, babe?

•    FIGS are a killer source of flavonoids, polyphenols, and antioxidants that help you go long and strong.  They look like a woman’s unmentionables, symbolized fertility in Ancient Greece and drove Cleopatra randy.  Many biblical historians wager that the fig originated in the Garden of Eden. Talk about a forbidden fruit!

•    GINGER has turned on most civilizations including the Chinese, Greek, Roman and Indian where it was hailed in the Kama Sutra.  The root’s arousing scent and health benefits does a male body good, increasing heart rate and perspiration (like in sex) and gets the blood flowing to your extremities, naughty parts included.

•    GRAPES were getting people off way before records were ever kept.  Just ask the Egyptians or Greeks or Romans who can attest to the effectiveness of feeding this anti-oxidant finger food to their lovers.  And we haven’t even touched on the subject of wine yet!

•    HONEY is rich in Vitamin B (root of testosterone) and boron (helps body process estrogen) so both sexes are covered.  It was the nectar of Aphrodite and medieval couples would channel their inner Barry White by drinking mead.  Why do you think they call it a honeymoon?

•    OYSTERS contain high levels of zinc that increase male potency, along with D-aspartic acid and NMDA compounds that can release hormones like testosterone and estrogen.  The fact that oysters resemble female genitalia is beside the point.

•    PINE NUTS are rich in zinc like oysters and have a long history as a natural Viagra.  These magical nuts have been used in medieval European love potions and the beds of Arabian lovers.

•    ROSEMARY is high in iron, calcium, and Vitamin B6, which can increase blood circulation to the skin and increase one’s sensitivity to touch.  It’s powerful scent plays on our scent memories, the strongest tie to emotional and sexual experience.

•    SEAFOOD of any variety has long been considered aphrodisiacs since Ancient Greece because Aphrodite was born of the sea.  Beyond tasting amazing, fish and shellfish are rich in protein and omega-3 fatty acids that kick cancer’s ass so surely they can help defeat a little erectile dysfunction.

•    STRAWBERRIES are not technically aphrodisiacs, but they are edible valentines shaped like hearts.  They were a symbol of the Roman Goddess of love Venus and when dipped in chocolate they legitimately become aphrodisiac city.

•    WATERMELON have quantities of citrulline that trigger arginine, quite literally the Viagra chemical that causes blood to flow and libidos to pump.  No doubt, the fact that this refreshing fruit contains cancer-fighting nutrients like lycopene and beta-carotene will be lost on most.