Welcome to Part II of the 2010 CTB Super Bowl recipe throw down. For the uninitiated or those lacking cognitive reasoning, jambalaya is a dish native to Louisiana, New Orleans in particular. Therefore this dish is dedicated to the New Orleans Saints. My life is too consumed with cooking and banging to pay much attention to football stats. The Saints or the Colts could triumph and it wouldn’t make any difference so long as I have someone warm and cuddly in my bed that night. But in terms of the Food Bowl, New Orleans crushes Indianapolis hands down. The cuisine down South is like a wet dream jumping right off my plate and down my pantaloons. It might be the French influence, it might be the innovations of American ancestors, it might be that I am totally gay for spicy food. I wager all three. But you will turn a few heads with this dish that feeds the hungry, unwashed masses. So whomever you’re cheering for, you will leave a winner with phone numbers and possibly a football-loving hottie on your arm. END_OF_DOCUMENT_TOKEN_TO_BE_REPLACED 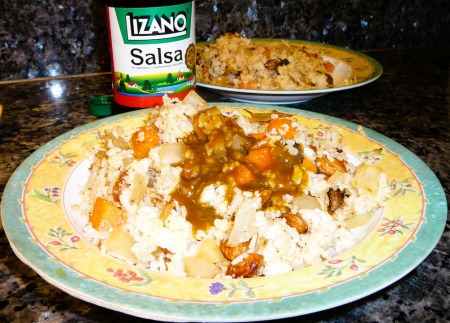 Sometime you just get lucky

Desperation leads to innovation.  That is what I learned making this ridiculous rice dish.  I was traveling in a foreign land where I met a local girl who spoke little English and I little Spanish.  But we were both hungry so I invited her over for lunch at my Uncle’s place with a very limited kitchen.  I was way out of my element not only from culture shock, but also from a cooking environment lacking even something simple like black pepper.  But I had professed in no uncertain terms, “soy un jefe de cocina muy excellente!”  So I went to work the only way I know how, recklessly.  There was an old bag of rice, some veggies I bought off a truck, 1 weird seasoning jar and the Lizano salsa, my new favorite condiment.  This stuff has as many uses as Astroglide, but far tastier to most.  My chica bonita was well impressed with the random dish I concocted out of thin air.  Her hunger for food was satisfied, but only my sexy gringo ass could satisfy her sweet tooth.  The takeaway for this sordid tale I offer you is that you can eke out a feast from an ice cube and cinnamon stick if you are clever.  It’s like making a condom out of saran wrap, but not as idiotic.

Total time: approximately 20 minutes
Projected cost: $5
Drinking Buddy: Moonshine that you made out of rubbing alcohol and grape soda*

*This is sarcasm. Cook To Bang does not endorse making yourself blind from homemade moonshine.  Save that for the hillbillies.

Ingredients (serves 2):
1. 1 tablespoon of seasoning of your choice (Spike Vege-sal used in this pic)
2. 4 tablespoons of Lizano salsa (available at most local Latino markets) OR other favorite hot sauce
3. 1 tablespoon of olive oil
4. 1 coffee mug of dried white rice
5. 1 large carrot
6. ½ a lemon worth of juice
7. 1 onion
8. 1 egg
9. 1 handful of raw almonds

Step 2
Cut up the onions and carrots into bite-sized pieces.  Heat up a decent sized pan with olive oil, then sauté the veggies until they soften (approx 3 minutes).  Add the seasoning and almonds and cook until the almonds soften (approx 2 minutes).

Step 3
Add the rice to the pan and mix them all up.  Crack the egg onto top of the rice and quickly beat it so it cooks into the rice.  Squeeze the lemon juice on top and crown it all with the blessed Lizano sauce.  Behold, an edible feast made from pure gumption. 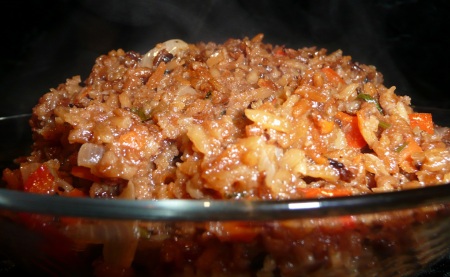