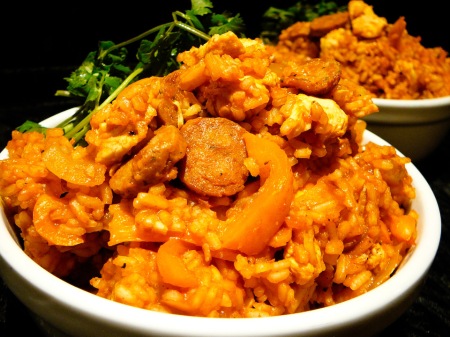 Welcome to Part II of the 2010 CTB Super Bowl recipe throw down. For the uninitiated or those lacking cognitive reasoning, jambalaya is a dish native to Louisiana, New Orleans in particular. Therefore this dish is dedicated to the New Orleans Saints. My life is too consumed with cooking and banging to pay much attention to football stats. The Saints or the Colts could triumph and it wouldn’t make any difference so long as I have someone warm and cuddly in my bed that night. But in terms of the Food Bowl, New Orleans crushes Indianapolis hands down. The cuisine down South is like a wet dream jumping right off my plate and down my pantaloons. It might be the French influence, it might be the innovations of American ancestors, it might be that I am totally gay for spicy food. I wager all three. But you will turn a few heads with this dish that feeds the hungry, unwashed masses. So whomever you’re cheering for, you will leave a winner with phone numbers and possibly a football-loving hottie on your arm. END_OF_DOCUMENT_TOKEN_TO_BE_REPLACED

Ladies, there’s nothing wrong with banging a feller.  Speaking from the POV of a feller, banging is the only thing that makes us feel special.  All the fancy cars and diamond encrusted Rolexes are just means to get banged.  So make like a goddamn Rockefeller and indulge in the rich oyster power.  The aphrodisiac supernovas of the sea will get your loins revving like a golf cart run on plutonium.  Slurping them down will make you feel momentarily like the richest feller on the planet. END_OF_DOCUMENT_TOKEN_TO_BE_REPLACED 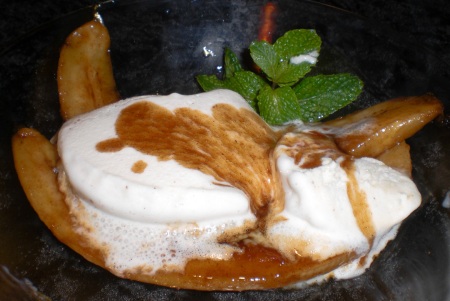 Only sexy monkeys deserve to taste these bananas

The South will rise again…in your mouth.  I do declare!  This outstanding Southern Cuisine classic is a sure fire way of impressing even that skeptical date who sneered at the 4-course meal you’ve already served.  Your caveman instinct will kick in like a racehorse back-kick to the cranium the moment you combine fire and food.  Putting an amazing dessert on fire is like thunking a cave-babe over the head with a club and dragging her into the cave (works on cave-dudes too).  The bananas sweet crispy outside gives way to a hot creamy center that is begging for some culinary cunnilingus.  The extra Foster sauce works like a much-need lube that allows you to navigate the sweet and rummy flavors.  And you can always cool it all down with dip in the melting ice cream pool.  Prepare to have your mind and possibly something else blown.

END_OF_DOCUMENT_TOKEN_TO_BE_REPLACED 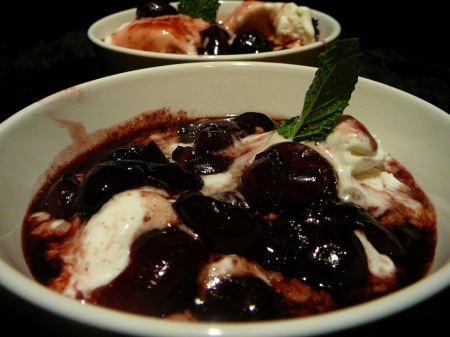 Unleash the banging beast from your Cajun soul!

There’s a ragin’ Cajun in each of us eager to get out and start bangin’.  Even those who’ve never been down south around Louisiana parts have one.  It’s in the fine print of your body’s owners’ manual.  He or she comes out every once in a while after you’ve fed yourself enough spicy food.  It tingles at first, and before you know it, your body has been possessed like in some voodoo incantation ceremony.  Your body dances, shakes, drinks and bangs to some mysterious West Indian drum beat.  Those who know you best won’t recognize the  crazy person speaking in barely coherent tongues.  The words you say will fall somewhere between English, French, and marbles in your mouth. But don’t you worry.  As soon as your ragin’ Cajun is done bangin’, they’ll become dormant and leave you to clean up the aftermath.  Should you wake up next to some sexy, you’re welcome.  If you wake up in jail, I ain’t paying your bail. 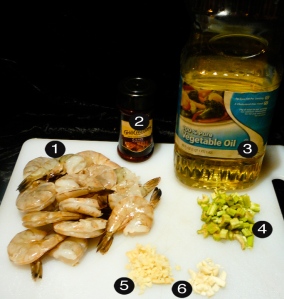 Step 2
Peel the tails and shells from the shrimp.  Sauté the shrimp in the oil until they pinken (approx 2 min per side). Sprinkle Cajun seasoning other the shrimp and cook in the flavor (approx 1 min).

Serve it up on a plate solo or with some SPANKING SPANISH RICE.