Rice pudding is comfort food.  Comfort = connection.  Connection= banging.  You can’t argue with sound logic.  Granted, rice pudding isn’t as sexy as a chocolate soufflé or crème brule.  But it warms the heart and inspires the mind. That is the conclusion I came to when I served this dessert to a date I assumed was a total prude.  She was a colder fish than the chilled cocktail shrimp I served as an appetizer.  Not even the MO’ LAYS CHICKEN MOLE could get her to flirt back.  I was ready to admit defeat (something I rarely do) and show her to the door.  But then I broke out the rice pudding I had chilling in the fridge.  The ice in my frigid date’s heart and the block of ice between her legs thawed.  She made the first move and the second and…let’s just say I felt a little violated after.  Good thing I had more rice pudding to comfort me when she left after using me for sex. END_OF_DOCUMENT_TOKEN_TO_BE_REPLACED

Holy shit, bra!  Did you catch Phish at Bonaroo?  I mean like wow, man!  Maybe I can articulate it without than bohemian euphemisms once the acid wears off.  At least I was able to pick up some hard-body hippie harlots in the lot selling Dank Organic Veggie Burritos out of my mom’s Prius.  They thought my vegan wraps were heady, yo.  I played them some old bootlegs from like WAY back in the day.  They were mad impressed, especially when they started rubbing the Phish tat across my heart.  Good thing they didn’t realize it was just henna until after I get my dirty hippie orgy on. END_OF_DOCUMENT_TOKEN_TO_BE_REPLACED 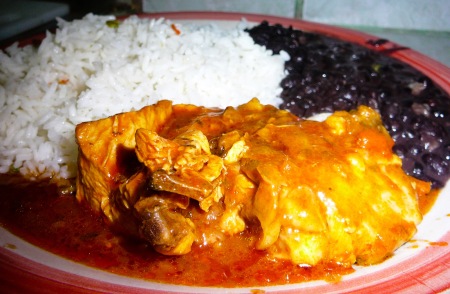 I have traveled the world sampling the finest food and women. Each has its own unique taste, smell and overall experience. Some are memorable like this simple chicken sandwich in a baguette I ate in Paris, while the same thing I ate in Des Moines, Iowa was as forgettable as that Matt LeBlanc show after Friends. The same can be said about certain late night rendezvous where I’ll never forget the first girl to show up at my house with strawberries and cream, but am trying to forget about the one who brought BBQ sauce and coleslaw. This research is done in the name of Cooking and Banging. I do not take it lightly! But one particularly memorable CTB story took place in Costa Rica. I met a senorita that laughed at me from the beach as I attempted to surf. My Spanglish worked well enough to charm her into inviting me over for a post-surf lunch. This chica’s abuela was making this chicken dish in her tiny kitchen. I ignored her granddaughter and assister her in making this dish. The ploy to choose the chica’s grandmother’s company over hers became a double checkmate. Not only did I learn and document an awesome new recipe, but the semi-jealous chica also made sure that I was completely satisfied after lunch in the hammock. END_OF_DOCUMENT_TOKEN_TO_BE_REPLACED 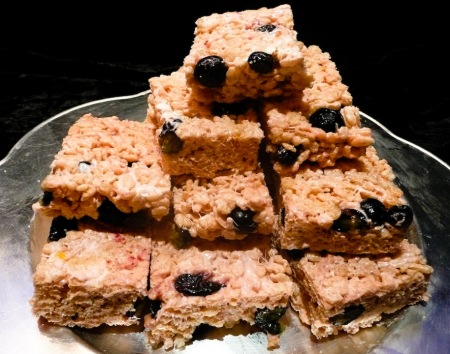 Krispy on the outside, soft and juicy on the inside.

Your favorite childhood treat is back with a black and blueberry attitude. This ain’t your momma’s Rice Krispie Treat.  The team of molecular physicists on staff at COOK TO BANG developed a groundbreaking improvement to this noble confectionery.  The naysayers who said our research grant money was worse spent than Sarah Palin’s Bridge To Nowhere can suck it.  Now that haters are off to ruin someone else’s day, behold: I reveal to you the revolutionary Krispie Treat supercharged with blueberry bomb blasts.  The consumer will be too busy rolling their eyes into the back of their heads to notice the antioxidants going to work.  Serve these treats to someone you’re sweet on  in full confidence that you’re holding your conquest’s health in the utmost regard.  It’s low in fat, rich in fiber, and overflowing with awesomeness. Keep in mind you’ll have plenty of leftovers that are great for post-coital snacks or to lure future dates to your place. No blue balls for you, my friend! 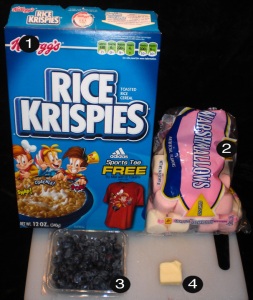 Step 1
Melt the butter completely in a deep pan or pot on low heat.  Toss in the marshmallows, and then cook and stir them until they become one big tasty goop (approx 5 minutes).

Step 2
Turn the heat off and dump in the Krispies and blueberries. Mix them all together thoroughly. Dump them all into a greased baking pan, and pat them down with a spatula (ideally sprayed with cooking spray).  Allow them time to cool (approx 30 minutes).  Cut up your preferred sized squares and distribute to the beautiful people. 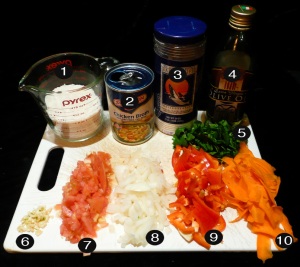 Curry some favor with these spicy flavors

This Thai curry dish is like a hot night of indiscretion in the steamy city of Bangkok. That’s where I first had a dish at a small restaurant right off of PatPong 2 before witnessing the seedier side of Southeast Asia.  So delicious and decadent. Curry can be a little dangerous and on the edge, like watching a tiger cage fight while telling the lady boys that you are not interested in boom boom tonight. Welcome to the spicy side of COOK TO BANG.  You will instantly become the bad boy or girl that your date’s parents warned them about.  They will sweat before you even touch them.  If you have that kind of effect with your food, your date can only assume that the night will only get steamier.  Yes, indeedy.  So relax and enjoy the happy ending.

Step 1
Mix the cilantro, oyster sauce, curry paste, coconut milk and flour in a bowl.  Stir vigorously like you’re still in Jr. High until the curry sauce becomes a pinkish-orange.  Set aside.

Step 2 (Skip this step if you want to make it vegetarian)
Marinate the chicken in the rice vinegar, soy sauce and lemon.  After 15 minutes, use 1 tablespoon of olive oil and cook the chicken until the meat turns white. Set aside.

Step 4
Pour the curry sauce over the veggies and stir thoroughly, making sure the eggplant has softened considerably.  Toss in the chicken and mix it all together with the veggies and curry sauce.  Cook another minute to ensure the flavors all absorb before serving over rice with some beer.