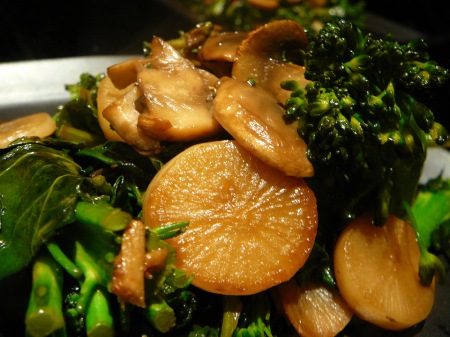 Step 1
First rinse the white radishes, chop up the stems, and slice radish rounds thinly. Wash the broccoli, chop the ends of the stock away so the trees break apart, and chop up the broccoli leaves if you have them.

Step 2
Heat up the sesame oil in the pan on medium heat. Saute the ginger (approx 1 min). Lay the radish evenly around the pan, adding the basil and salt, cooking until they soften (approx 3 min). Throw in the broccoli, broccoli leaves, radish stems, and mushrooms. Stir-fry away once you add the oyster sauce until the leaves wilt and broccoli softens (approx 4 min).

This stir-fry is a perfect solo act, but would do nicely with something CARBOLUSCIOUS. 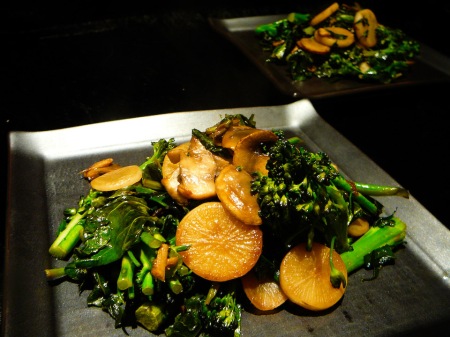 Cash money makes our world go around. It’s the international language of “fuck you, I’m rich!” Here at Cook To Bang we like commerce as much as the next perverted food blog. But the whole spirit of CTB comes from the desire to take money out of the dating equation. Food is the great equalizer. Everyone needs to eat. Almost everyone wants to bang. You don’t have to bang your lover on 1000 gold thread count sheets. A sleeping bag over a La-Z-Boy could be just as much fun and certainly more of an athletic feat. Everyone wins when you Cook To Bang. And this CTB take on a classic Chinese dish will win you much props and improper propositions.

END_OF_DOCUMENT_TOKEN_TO_BE_REPLACED 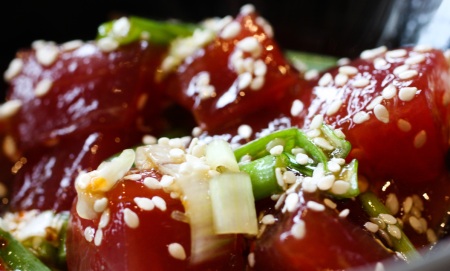 Aloha, hula girls! Kamana wanna laya. That is Hawaiian for, “Come over and I’ll make you dinner.” At least that’s what the tour guide tart said to me on a tropical rainforest walk. Being the unusual tourist with caustic wit is at least good for something. My lack of fanny-pack, Pearl Harbor commemorative t-shirt, and golf hat gave me away. Eager to get away from the family, and, do I really need a reason to jump into the car of an attractive stranger? This lickable local showed me the real Hawaii, including a real Hawaiian bar where my weak sauce knowledge of surfing lingo was mocked. Lucky for my fragile ego, she took me home after for the promised homemade meal. This babe had a badass blade and sliced up sashimi grade ahi tuna her friend caught that morning. I honestly can’t tell you what was better, the poke or the poking. END_OF_DOCUMENT_TOKEN_TO_BE_REPLACED 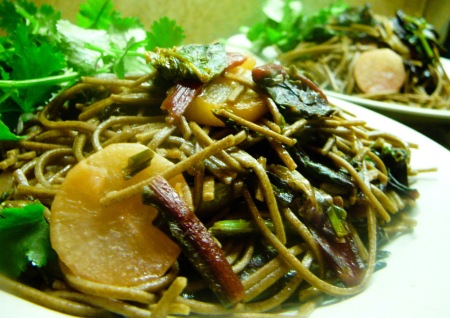 If some asks if you have balls, assure them you got plenty flavored with ponzu sauce

Looking for a side dish that will steal the show and make your guests go “Ooh ooh!”? Look no further than this Japanese/Israeli fusion. Truth be told, I ate it a fancy restaurant that served seared ahi strips over it. The tuna was aight, but the couscous smacked me in the face and left me smiling 7+ years after the fact. Sadly, this restaurant shut down shortly thereafter. So I was left with little choice but attempt to recreate it in my own kitchen. I’m certainly glad that I did because this little side has been wowing girls ever since. Repeat CTB dates will often demand I whip up a batch, even if I’m serving PASTA. Apparently it left more of an impression that my naked body did after the meal. Fair enough. So long as one of my dishes pulls in repeat visitors willing to gratify my ego and libido alike, I will always have enough ingredients on hand should they be called for. And with that, I must whip up another batch because the ponzu couscous-hungry zombies have surrounded my house once more. END_OF_DOCUMENT_TOKEN_TO_BE_REPLACED

Give ’em a good talker before giving ’em a shocker!

You could almost call this the “shocker” of salads.  There you are serving your date up some salad and they’ll assume it’s some sort of noodle salad.  Ha!  You will laugh uproariously when you inform them this gluten and low-carb salad ain’t got none of that noise.  We’re talking healthy to the point of being almost impossible to fathom.  How could a salad taste so freakishly awesome with a texture akin to licking an angel’s naught bits?  Unfortunately for you, my lawyers have informed me that these are trade secrets.  But I fought back and insisted in at least giving out the recipe to my readers. So COOK TO BANG in good health knowing that somewhere out there you have a digital chef wingman looking out for your baser needs. Who loves ya? END_OF_DOCUMENT_TOKEN_TO_BE_REPLACED