French your breakfast and your date will be Frenching you

Holy shit, it’s a leap year! That means paradox like the English and French getting along. Some say the English need to loosen up.  They walk around with their quiet desperation eager to break out of their shells and become the wild men and women that would make their ancestors gasp.  This tends to happen whenever limeys leave the UK and travel to exotic locales.  Ibiza…nuff said.  Perhaps a little French Laissez-faire is just the ticket.  So alas, I have employed a little French to make the sexiest English muffin you ever did eat.  It was pure accident and the girl I made it for wasn’t even English or French for that matter.  But with no bread in sight and my sweet tooth demanding tribute be paid, I made do.  I’m sure glad I didn’t have bread because I was down to French these English muffins all morning.  My date from the previous night was confused, thinking it a tad early in our affair for me to make proclamations of love.  I didn’t have the heart to tell her I was speaking to my breakfast.  But then she took a bite and the love fest continued well into the afternoon.

Step 1
Create the batter by whipping up the eggs, cinnamon, vanilla extract and milk.

Step 2
Split the English muffins in half and submerge them in the batter.  Heat up a pan or griddle on medium heat and grease it with the butter.  Throw the soaked English muffins on the pan all together and pour the excess batter over.  Cook each side until it browns and flip (approx 3 min per side).

Step 3
While you are Frenching the toast, create the extra awesome syrup.  Heat up the syrup in a small bowl, chop the banana into bite-sized pieces and toss them in with the raisins.  Cook until the syrup boils and the bananas brown slightly (approx 2 min).  Serve over your sexed up English muffins and hold on for dear life.

Serve this breakfast knowing full well that you could swim across the English channel, bridging that cultural gap. 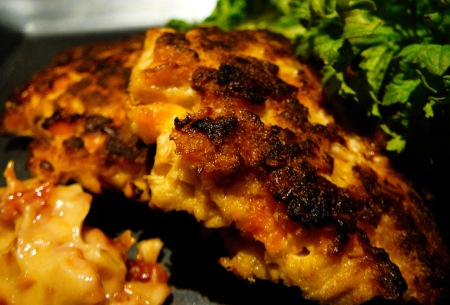 Patty cakes, salmon cakes, banger man! Bang me a salmon cake as fast as you can.

That Marie Antoinette was quite the strumpet of her day. This Versailles Vixen raised her bloomers for everyone in the court, men and women alike, except her pantywaist husband Louis XVI. What a scandal it must have been for the French queen to be a whore and the king likely gay. Every would-be suitor need only present an edible treat to Mademoiselle Antoinette and into her boudoir they would go. This was a precursor to COOK TO BANG. A little known historical fact: When Marie Antoinette said, ìLet them eat cake!î she meant salmon cakes. These are cheap and easy to create, but major crowd pleasers. If only Marie’s messenger hadn’t flubbed the message. Off with his head! END_OF_DOCUMENT_TOKEN_TO_BE_REPLACED

You gotta hand it to the French. No one pulls off being a bunch of fancy bitches quite like them. You’ll look like a goddamn pansy if you try to replicate without the accent. But for some reason they can act ass all sissy la la and it’s totally acceptable. So when it comes to cooking French-style cuisine, I always speak in a ridiculous accent, wear a beret, and engage in all things French: French fries, French kisses, French ticklers. Ca va? Tres bonne. Ca va et toi? Breakfast will never be the same once Frenchy McFrenchface comes to play. END_OF_DOCUMENT_TOKEN_TO_BE_REPLACED 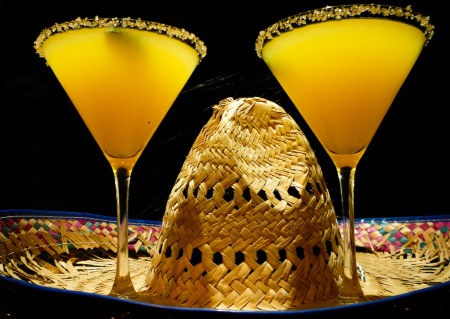 The time has come my friends to celebrate the Mexican army’s triumph over France in 1852!  Those of you who think today is Mexican Independence Day need to drop the Corona and sober up.  You see, nothing says raw sex appeal like Mexican military history.  No doubt we will all focus on the strategic importance of this victory rather than get piss drunk on tequila and stuff our mouths with all manner of FINGER FOODS.  But if you must indulge in the tomfoolery of celebrating Mexican culture, drink with style. The sexy senoritas and senors will respond more favorably to a beverage of this caliber than to a margarita made from that acidic pre-mix and bad tequila.  Now make like a Mexican jumping bean and dance around that sombrero.  Ole! END_OF_DOCUMENT_TOKEN_TO_BE_REPLACED

Roquefort and Roll out of bed after a night of unspeakable acts.

This salad will rock her world.  It will also rock his world.  And its world should your dog eat it before you can.  It’s like a techno dance party in your mouth.  Each complimentary flavor will have the chance to bust a move on your tongue’s dance floor.  The tart of the lemon will give a shout out to the creamy Roquefort who kicks it over to the endive ditty on out to the crispety crunchety apple who tips its hat to the tangy cranberry bossa nova.  No one is immune to the uncontrollable taste bud tango.  This is a great way to warm the evening up with a little bit of this and whole lot of that.  Warning: those allergic to edible orgasms should steer clear if you know what’s good for you. END_OF_DOCUMENT_TOKEN_TO_BE_REPLACED

That no good tart tastes too good

What a filthy, no good tart!  Strutting itself around unpeeled and sweet to a fault.  You’d think this tart would have more manners being of European stock.  But clearly all it wants to do is lay about and put itself in any mouth it can find.  No doubt, this apple has fallen very far from the tree.  But I suppose you think I should just cut it some slack, right?  Just let it go while it tarts around on any available plate, being passed around like a marijuana joint at some hippie love orgy?  I say hell no!  The only solution I have is to cool its jets.  I’ll use the only thing I have in my arsenal.  Ice cream!  That’ll teach it to be so sweet, seductive and bad for me.  Just to prove to you I am the bigger man, I’ll take one bite to show the rest of you how to be disciplined.  See?  One bite and I can say no…all right two bites.  Three.  Screw it!  I’m taking the rest of the tart into my bedroom. But I’m not going to enjoy it!  Seriously.  I’m eating the rest for it’s own good.  Let that be a lesson to the rest of you! END_OF_DOCUMENT_TOKEN_TO_BE_REPLACED 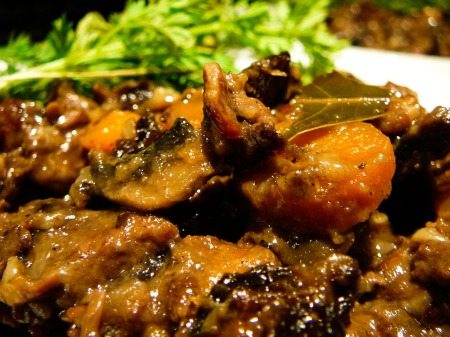 Where's the beef? Check my pantaloons.

I satisfy my man with a hearty meal and with his pleasure fulfilled I can be pleased in return. This recipe may seem daunting but believe me it is well worth the foreplay. With the right prep the ‘oven’ does the majority of the work and gives the strength the to keeps everything up all night long and keep the au jus flowing.  This recipe is surely is femme fatale. Ooh la la! END_OF_DOCUMENT_TOKEN_TO_BE_REPLACED

Tickle their toast from coast to coast

The French have given Americans so much: the Statue of Liberty, tongue kissing and more varieties of food than positions in the Kama Sutra. Those beret-wearing frogs sure know how to live.  They believe in embracing the finer things in life like food (including wine), art (porn counts) and sex (ménage a trios anyone?). Merci beaucoup, my French friends!  Breakfast is whole lot sexier thanks to those wine-guzzling hedonists.  So embrace the meal after you’re done embracing the lucky lady or man who slept over.  Surprise them with this outstanding good morning treat wearing nothing more than an apron and a kinky smile.  Bonus points if you use a French accent when you serve up this gourmet take on a classic breakfast dish.  Ooh la la!

Ingredients (for two, two toasts each):
1. ½ cup if milk
2. Maple or breakfast syrup
3. 2 tablespoons of jam
4. 2 teaspoons of cinnamon
5. 2 eggs
6. 2 tablespoons of cream cheese
7. Butter to grease pan and serve a top the meal
8. 4 slices of Texas toast or other thick bread slices

Step 2
Pour the milk and crack the eggs into a wide bowl.  Toss in the cinnamon and mix it all into a batter.  Dip each piece of prepared bread in the bowl, and then dip again on the other side so they absorb some batter.  Be sure not to leave it soaking too long or you’ll end up with flaccid French toast.

Step 3
Grease the frying pan or griddle with some butter.  Throw each piece of stuffed, dipped bread and grill them up.  Cook each side about 3 minutes before flipping.  They will be browned, with perhaps a tiny black.  Serve on a plate with a slice of butter, syrup and perhaps a proclamation of undying love. 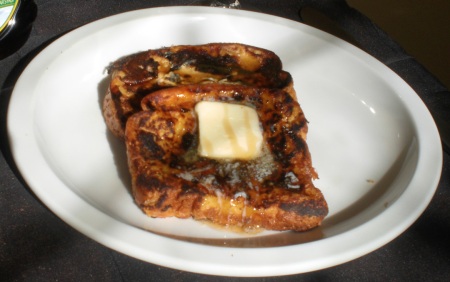