Arrr! Ahoy, maties! I spot a hard body off the starboard bow! Land ho (or was that hos?)! We shall not rest until we collect all the doubloons in their pantaloons. Plunder everything you can before we make off into the night. We shall woo them with our finest spices traded from the far East. The healthier, shinier, and tastier the treasure, the better! If you don’t like your captain’s skullduggery, walk the plank!

END_OF_DOCUMENT_TOKEN_TO_BE_REPLACED

Diddle me this.  Diddle me that.  Who’s afraid of getting fat?  Not I, says the COOK TO BANG chefs who cook healthy, badass food, and then subsequently burn off those calories banging like chimpanzees on meth.  So we can afford to indulge in a little turbocharged bar food every once in a while.  You deserve to make something ridiculously easy that earns you props from the prissy crowd who “don’t usually indulge in such low brow foods.”  So long as they put out after they are put in their place I am down to put up with them.  Aren’t the whiners the most satisfying to bang senseless?  It’s like wearing out their motor mouths by stuffing they with the tastiest of treats.  Ain’t no stopping you from getting some peace…of ass. END_OF_DOCUMENT_TOKEN_TO_BE_REPLACED 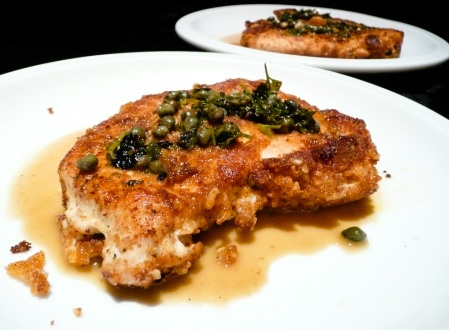 I see you poking around my business.  You could at least buy me dinner first.  Or better yet, cook for me!  Make me some Italian comfort food and I might just put out.  No promises though.  You still have to woo me. But just want to put it out there that poking my piccata is a possibility.  Just play it cool and don’t act a fool.  Behold this simplified and slightly healthier version of the chicken piccata that takes all of 20 minutes to whip up for who ever is down.  This recipe was born after a particularly exhausting round of bedroom acrobatics that left my tantric trapeze partner and I famished.  I recreated my favorite piccata dish from my childhood using repressed memories and innovation.  Thank god for those frozen chicken breasts stuck to the bottom of my freezer.  That protein boosted me back into top form for another round of aerial maneuvering around the bedroom.  To this day, I have no idea why there are clowns and a lion tamer in my bedroom.  I’m not THAT kinky! END_OF_DOCUMENT_TOKEN_TO_BE_REPLACED 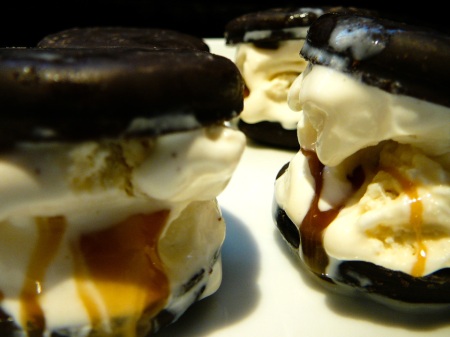 This dessert was NOT approved by the Girl Scouts of America.

Sometimes the way to lure in a hottie is to appeal to their inner fatty. Don’t make a habit out of it or the fatty will take over like the Dark Side took over Darth Vader. But indulging every once in a while, or more than that if you’re like me, is what life is all about. Balance those small doses of decadence with a few hours of calorie-burning screaming orgasms. Burn enough fat and you deserve another round of Thin Mint Fatties. They are delicious, refreshing, and quick to assemble so you’ll be back to the tainted task at hand in no time. END_OF_DOCUMENT_TOKEN_TO_BE_REPLACED

Do I wanna? You damn skippy!

Do I wanna Havana? It’s been a dream of mine since I was a small child. Seriously, I picture myself in the long long ago era of Havana’s heyday drinking mojitos on the street and puffing on fat cigars. Cuban girls, a preferred pastime of mine, my version of baseball, bring out the happy happy in me. So yes, absolutely I wanna Havana. Too bad I’m an American with that 50 year-old embargo cock-blocking my Havana cabana-existence. So I must resort to other means. Namely serving Cuban style avocado salad to the Cuban girls and hoping to not piss off Castro brothers in the process. END_OF_DOCUMENT_TOKEN_TO_BE_REPLACED

That’s how it all starts.  An innocent maiden voyage evolves into an exploration deep into the unknown.  Justify it any way you want to.  We can pretend it’s a game.  Start with the tip and see how it feels.  If it’s no bueno, fair enough.  But then again, we’ve already gone this far.  What’s a few more steps into the abyss?  I mean the collateral damage has already been sustained.  So why not enjoy it for what it’s worth?  We can write it off as youthful indiscretion.  An official OOPSIE!  Let’s blame the extra bottle of wine.  We both should have known better.  But we’re all adults and mature enough to move on.  I’m glad we had this discussion. I feel better. Don’t you?  Oh by the way, have you tried these killer stuffed mushrooms? END_OF_DOCUMENT_TOKEN_TO_BE_REPLACED

GET A ROOM! HEIRLOOM TOMATO SALAD

Get a room? What’s wrong with a little exhibitionism? You get a room!

No doubt, some ninny has scolded you for PDA’ing the night away.  They are just jealous of your mojo and spontaneity.  It’s not your fault they aren’t inspired to engage in carnal acts in public, possibly in a suburban shopping mall or on a merry-go-round.  Chances are they haven’t banged properly since the Reagan administration.  Tough titties.  You on the other hand still have a pulse and should cry out, “To hell with you cock-blocking conservatives!”  Grab that special someone’s ass and pull them towards you.  Encourage them to open their mouth and feed them something refreshing and sensual…like this salad.  The fresh tomatoes will dance on your tongues like another tongue, preparing them for the inevitable closing move that will ruffle the feathers of every starched shirt in a 10-mile radius.  Know in your heart that you haven’t done your job until you get complaints from the morality morons. END_OF_DOCUMENT_TOKEN_TO_BE_REPLACED